The land of Ithea is no stranger to war. Conflict breaking out constantly is the norm for the realm, which began an era of constant fear and sleepless nights, for all who inhabit the continent. A northerner by the name, Haston, would one day change that with rallying cries and only necessary war; showing even the most powerful and evil foes mercy. However, just shy of twenty years into his cause, most of the issues of the realm had seemed to be resolved under the new banner of the Alabaster Kingdom. Then on, for over three hundred years, the land of Ithea knew peace.

Unfortunately, a few of the tyrannical gods grew bored of spectating such peace and goodwill towards fellow man or beast. So a few of the gods made a game of this spectacle, wagering that if the Alabaster Kingdom were to… disappear…, the residents of Ithea would once again tear each other apart. However, not all gods were for this diabolical plan, but they were quickly outvoted and the gods froze the Alabaster Kingdom in the very darkness that it vowed to prevent.

As the gods predicted, not even days later– borders closed to some and treaties broken with others; war was once again running rampant across Ithea. These unfortunate events transpired what was more than a thousand years ago. The effects of those events grew into new factions with new ideals, new religions, new desires… There is much more than war. There is the Conflict of Ithea.

Six factions take the stage. The Amatsu Alliance. The Lion’s Den. Natum Kaal. THe Host of Minas Urdu. Silverglade. The Empire of Primordia. Which one will you choose, adventurer?

Our first event is coming to Eastwind Castle in Trenton, SC on April 2nd through the 5th, 2020. Tickets are on sale for 100$! Join us on Facebook so you can get all the information you need to get started! We also have a discord so join in on the discussion and help make it a fun experience for you and all players! This is a medium combat; high fantasy, full immersive/realistic larp. Our goal is to bring European Larp quality larp experiences here to the States!

Dragonhold – A Shire in the Kingdom of Neverwinter 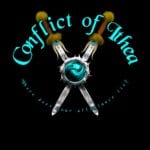