Keystone is a live-action roleplaying game set in the remains of the Dakota Territory in 1885, twenty years after a global catastrophe has forever changed the known world.

As a citizen of the new world, the world forged from the remnants of the pre-­Cataclysm nations, you may have noticed that some things have rightly changed over the last twenty years. Heck, for that matter, things were never the same since the Difference Engines were first erected in the United States of America and the United Kingdom in 1830. Most of you have never known peace and prosperity in your time, whether your people ran to keep up with progress, faced off against tyrants or eke a meager survival during desperate times. Now, with the Second Cardiff Expedition underway, leading thousands of people to the new Continent, things aren’t likely to calm down anytime soon. If you hope to keep up with the many changes that are underway, you best pay attention and figure out how things are done. 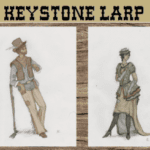