We are The Mixed Medieval Arts.
In Watford, Ontario, within 53 acres of rolling forest named the Graven Woods, inside a one and a half acre walled town, there be Epicness.
A full out HARP ( a Heavy Action Role Play ) with 7 differing schools of magic from traditional spell casters, to those whom summon powerful creatures and bend them to their will, and then the most powerful of all, the magic of the Runes.
A combat system where screaming Barbarians rush in with fists swinging in savage rage, where Pirates are tackling foes to the ground and where Paladins are bellowing war cries as they fearlessly charge and send flying the blasphemous.
We are the MMA, a fantasy as real as it gets.
Siege the Day.
TheMMA Website can be found at ~
https://themixedmedievalarts.wixsite.com/home 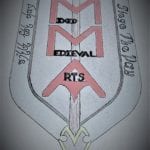