Underworld is a dynamic and expansive world that players take on the role of their choice and immerse themselves in the stories we create. Each group is called a Guild, and Japan’s guild is called Havenhollow. Our game takes place at our place in Toyota-shi. Our game stories are created by our Game Master, as well as the players themselves.

Underworld is a dark fantasy, medieval game. It has a full system of rules and extensive world history with 9 other chapters in Canada. This allows for both local chapter stories as well as global stories. Once a year there is a large gathering of chapters with over 200 people, and global story lines are played.

We welcome anyone and everyone, regardless of background or language. Each new player is asked to make a character with the help of our Guild. Players can be a warriors, rogues or scholars, and develop secondary occupations that give them a monthly in-game wage with Underworld coin. Skills with a sword or magic, talking or stealing, it is up to the player and their imagination.

The players’ actions, be it good or evil, influence the story and change the story ending. If a hero saves the day, or a monster kills the whole group, it is up to the players.

Combat is with safe foam weapons, and players can have more power with more experience. Some players have more hit points than others, and points can be added with armour points. Characters are allowed to wear any clothes they wish, and even metal armour.

Characters are able to develop their character within the Underworld system, and this includes faith, culture and morality. There is a wide variety of storylines, and since this chapter meets usually once per month, the storylines continue.  Characters depend on each other for their development, be it with character points, skills or learning how to fight with a sword.

Underworld is a friendly group that always welcomes new and first time players. Enjoy LARP outside and come fight with us! 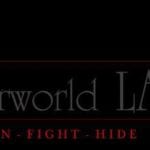