INTO A 19TH CENTURY WORLD OF MAGIC, MYSTERY AND INTRIGUE…

Armistice Arcane will transport you back in time to the victorian age where you will become one member in a vast arcane where the future of the magical world will be decided.

This will be an experience of high-politics, gothic horror and magic. It’s not an experience for the light of heart either, as participants will explore themes of light and dark, friendships, alliances, diplomacy, fear and anger. Among other things this all inclusive, block-buster style event is going to look at what it means to push the levels of “acceptability” set forth by society.

provide all players with a weekend of immersion with all lodging and food included.

We also provide a number of items, depending on which package you purchase, to enhance your in-game and out-of-game fun.

The event is being held at the Le Pavillon Hotel in New Orleans – a Victorian Era luxury hotel with spacious, well-equipped rooms, thematic decorations, delicious catering, and a beautiful view of both downtown New Orleans and the French Quarter.  Considered one of the most haunted hotels in New Orleans, it might also provide you with even more of a magical experience than we could expect!

Peculiar Crossroads Productions have been running and designing games for over ten years. The team is made up of Mark Hill, Rob Paul, Kathy Amende, Scott Brown, Corey Lowenberg, and Jaimie Spencer. Their team is ecstatic to bring their creative visions to a much larger audience with Armistice Arcane.

The event will be hosted at the Le Pavillion Hotel in New Orleans, Louisiana on January 5 – 7th, 2018. The event is all-inclusive: food, lodging, props, custom character creation and a truly immersive experience!

The Armistice Arcane, inspired by the Penny Dreadful novels of the Victorian era, is a game set in New Orleans during the late Victorian era.  It is the story of eight magical societies that have formed in the United States since its founding as a country.

"Instead of action driven by stats on a sheet, the characters in Armistice Arcane have richly detailed histories to push the story forward."

Every person that I’ve talked to who has attended a Peculiar Crossroads game in the past has had the same resounding praise, “The writing is stellar!”. From the overall story of the game, down to the minutiae of the characters written for each participant the writing that drives the story forward is the hallmark of their events.

Over the summer their team wrote an epic event that I wasn’t able to attend, but many of my close friends were able to attend and they are all still raving about the writing, the characters and the story Peculliar Crossroads were able create.

Now, for the first time, they’re bringing all of their prowess for a large international audience to host their own blockbuster larp.

I took a few minutes to chat with Kathy Amende and ask a few questions for players who might not have taken part in a game of this type:

Q: How will this event compare to other larps most americans might have attended?

K: Armistice Arcane is a Nordic style larp fully committed to collaborative storytelling, immersion, and emotional resonance. We want our players to be, as much as modernity will allow, drawn into a world of our making and to help us tell stories by experiencing that world rather than playing a game. Unlike in traditional parlor larps that have dominated the American scene for decades, Armistice Arcane is not tied to an established setting or rule system and thus has carved out space for an original and unique narrative.

Q: Is this a “nordic larp” and if so, what makes it a nordic style event?

K: The beauty of Nordic larps is that they tend to be artistically driven, and so the game experience reflects the vision of the designers. A few years ago, when we removed conflict systems and numerical sheets, we discovered that our players had an entire new level of immersion in the story we crafted. While conflict through mediation is not a new concept in America (games like New World Magischola have had great success with this), it is still gaining traction in our public freeform larps. Instead of action driven by stats on a sheet, the characters in Armistice Arcane have richly detailed histories to push the story forward. They have motivations, objectives, goals, and webs of connections to other players that will allow for a fuller immersion into our magical Victorian New Orleans.

Q: Why custom written characters, as opposed to letting players write their own?

K: We have created a world already populated with these characters in order to make it both easier to build a comprehensive story and to make immersion and immediate play easier for the characters by ensuring that 1) every character has an important role to play int he story and 2) so that every character can come in with a web of connections to other characters.

Q: What level of customization will participants have with their characters?

K: The players do get to have some say in which factions they play in as well as the kind of relationships their characters might have. We ask our players questions about comfort levels and the things that they are interested in, and then give them characters that jibe with the answers they’ve given us. For our leader positions – characters that have earned more respect in back story – we spend a great deal of time talking with them and making sure that they are prepared for leadership roles. We also ask them to suggest some elements that we can add to their characters that would make them more easy and fun to play.

There are only 100 tickets available for this event and since nothing like it has been done in the states it is sure to sellout fast! They’ve already sold nearly a third of the spots available and factions and characters are taking shape.

Don’t wait to get your spot!

Avegost - Photos of A Full Immersion Larp in Georgia 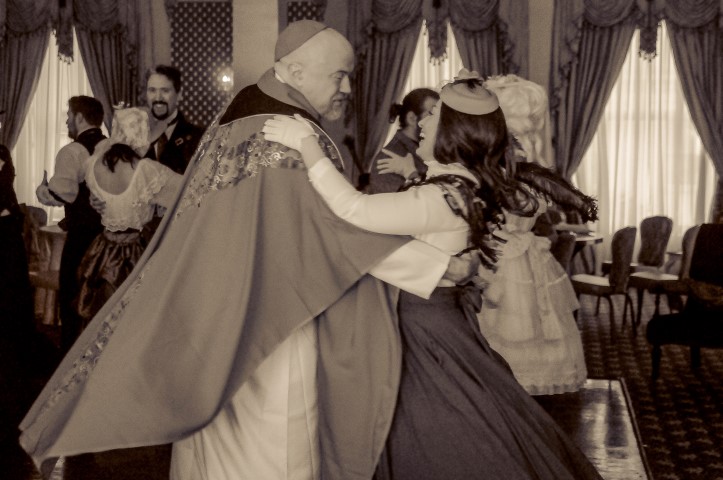