Life and Larp with Melany Love 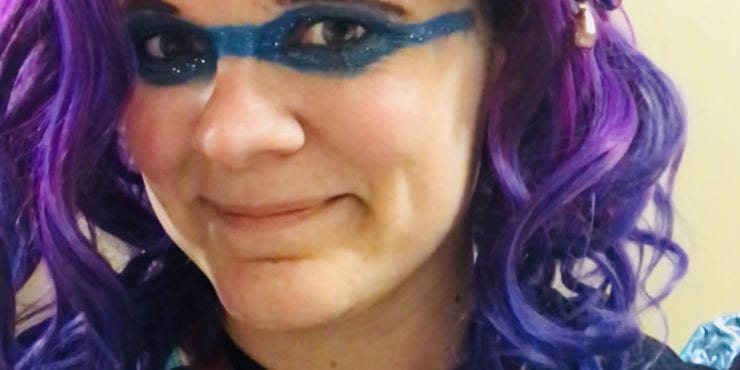 Where to start…introduction and explanation? My name is Melany Love, and I’m from Indiana. I’ve been a homeschooling mom and writer for most of the last decade, but two years ago I got my broker license and became a real estate agent. My husband (and Prince Charming) of fifteen years and I live with our five children in a large “fixer-upper” in a small, homey, farming town with few other geeks. Four of our five kids are special needs, so we lead a busy and unique life.

As a child, I read every fairy tale and fantasy story I could find, watched all the fantasy movies my relatively overprotective upbringing would allow, and memorized The Old Code from “Dragonheart,” the quoted dialog from “Labyrinth,” the opening story of “Arabian Nights,” and the mantra against fear from “Dune.”

I was constantly in trouble in school for reading or writing my own works of fantasy (usually pertaining to Neverland), instead of paying attention in class. My favorite D&D campaign I wrote and ran was one for St. Patrick’s Day, where the PCs helped a cleric named Maywen rescue his sister from wandering into a faerie circle.

I’ve been LARPing for six years, ever since I dragged my reluctant husband, Michael, to our first event. We’d already played D&D and Magic: The Gathering for years, we avidly watched every fantasy movie (no matter how bad the reviews!), and all of our children’s names are lovingly borrowed from Narnia, The Neverending Story, and The Lord of the Rings.

I’d been dying to try out LARPing ever since I’d heard it existed (and often wore costumes to D&D night already), but Michael had said, “Dressing up in costumes and hitting people with foam swords is where I draw the line. It’s just too dorky.” He went along that first day as an, “I’ll do this, but you owe me,” but it only took him fifteen minutes at Shifted Lands to apologize and admit it was the most fun thing he’d ever done. 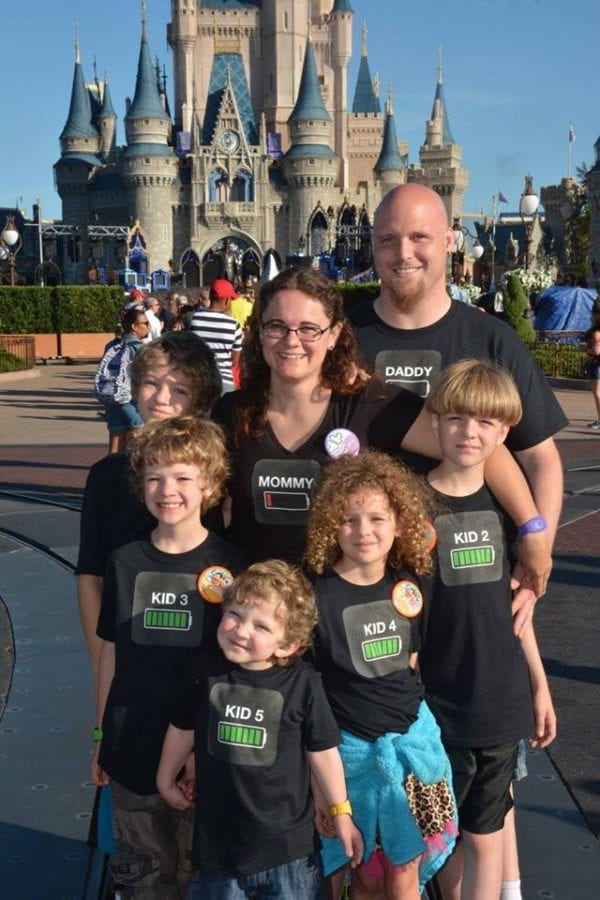 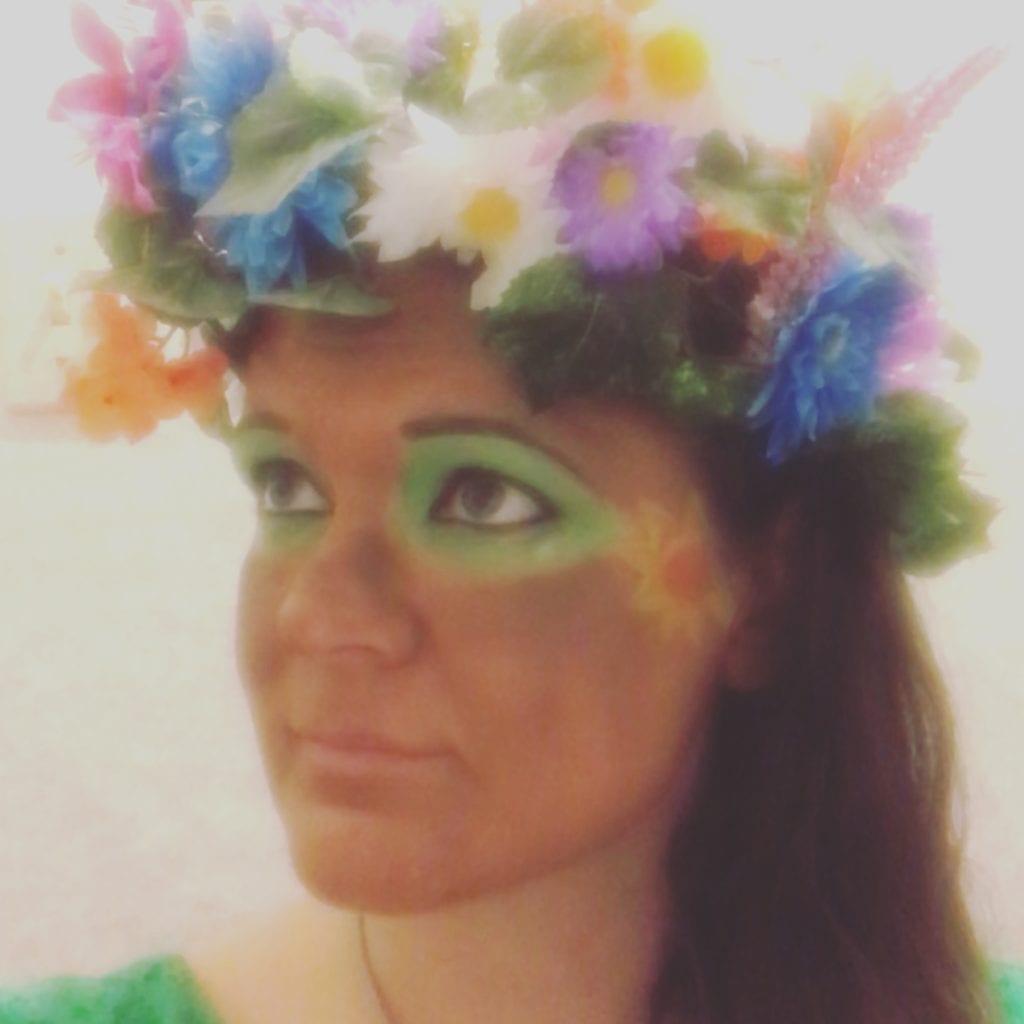 Now I’m a combat marshal, and he’s a logistics marshal and in training to be a plot marshal, and we’ve probably recruited more people than anyone else. Even Michael’s dad plays regularly and enthusiastically, at 57 years old! We rotate bringing a child or two (once they turn eight, so our youngest hasn’t joined us yet,) so that they can learn a bit and hopefully one day enjoy it for themselves as adults. It’s nice to have a hobby the whole family can get into together. Shifted Lands does not allow combat for kids under thirteen, so they all wistfully dream of that day while we practice at home. They all get so excited about new costuming and production skills in game, and we’ve had to buy a giant markerboard to keep track of who is playing what games as which characters.

I love that LARPing gives us the chance to try out so many other new hobbies like sewing, leatherworking, making chainmail, songwriting, and foam weaponsmithing. 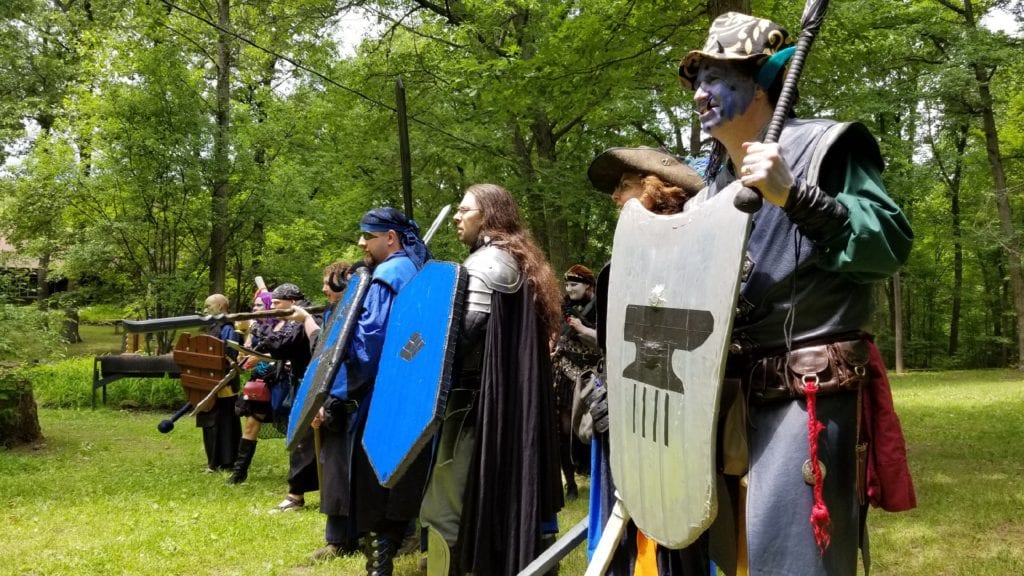 I love that our children have learned responsibility and organization skills—once they forget an item they didn’t pack and suffer consequences in game for it, they remember to pack it next time! I love the chance to escape into a world where I can be more than a real estate agent and mom of five…I can be a powerful mage, a beautiful princess, a devout paladin…whatever I want. I love that through my hobby, I’ve grown so much…I’ve sharpened not only my acting skills and athletics…but also my insight, diplomacy, and problem-solving. I personally know of other players who have even used LARP to overcome social difficulties or work through past traumas. Lastly (and best of all), I’ve made so many great friends with so many different perspectives and lifestyles outside my own. LARPing (and really just “Geek” in general) has the power to unite all of us behind a common interest where we can put aside our politics and religions to focus on what unites us rather than what divides us, and in today’s world especially, I think that’s invaluable. 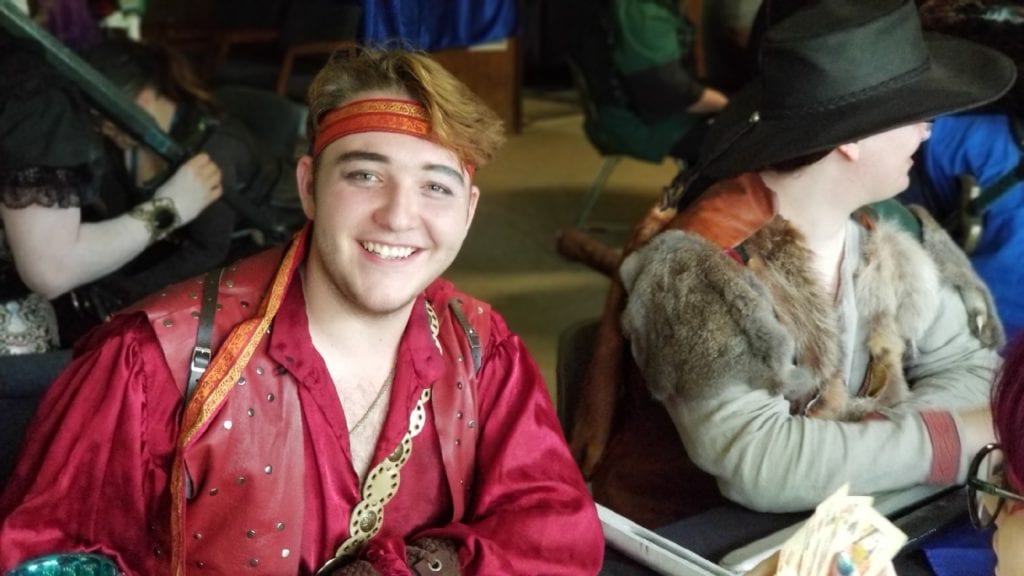 Shifted Lands is a high-fantasy LARP based out of Holly, Michigan and Columbia City, Indiana. It’s been around for twenty years, and we play one weekend a month in each of our locations. We balance role play with combat. My characters are Lexaralynthialissaralima Pegacorn, a faerie chronomancer, and Aravis Riversong, the formerly-human-bard-now-verdant-paladin.

In my future blogs for larping.org, I plan to give a general “this happened” of the various events from a player perspective.

Recently our club celebrated some special and new publicity; we had a visit from Jake Draugelis of WDIV in Michigan of 1d4, a division of Click on Detroit. We all worked together to promote LARP awareness and specifically the Percy Jackson-themed children’s day camp we have helped run each summer for two years now. 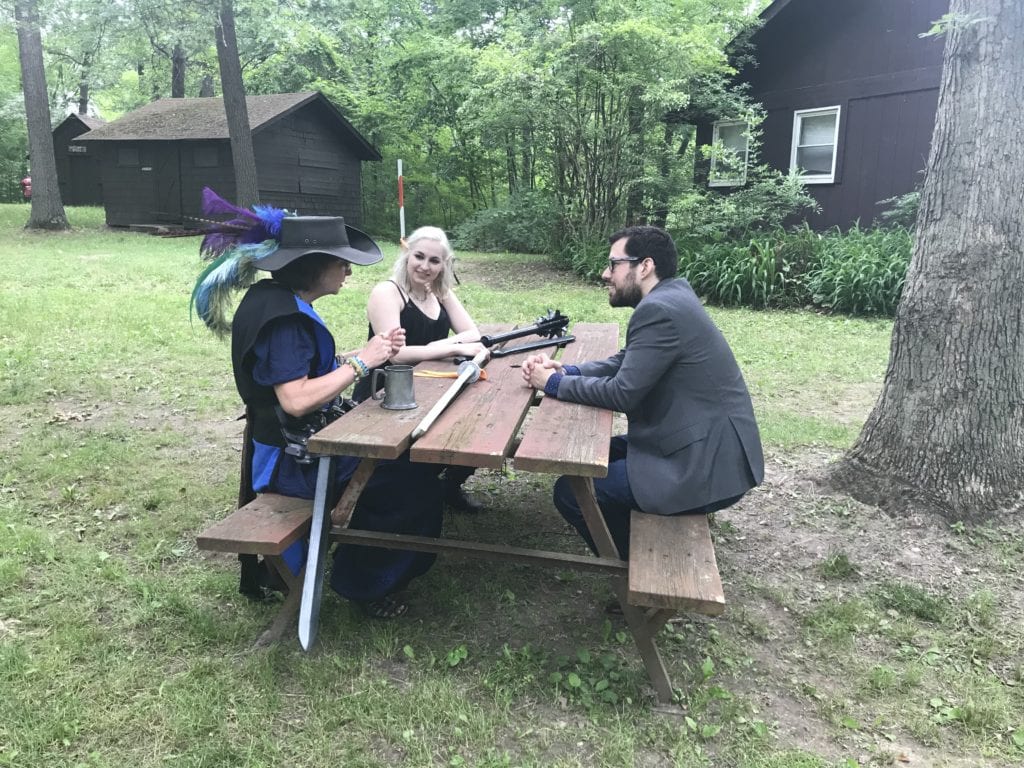 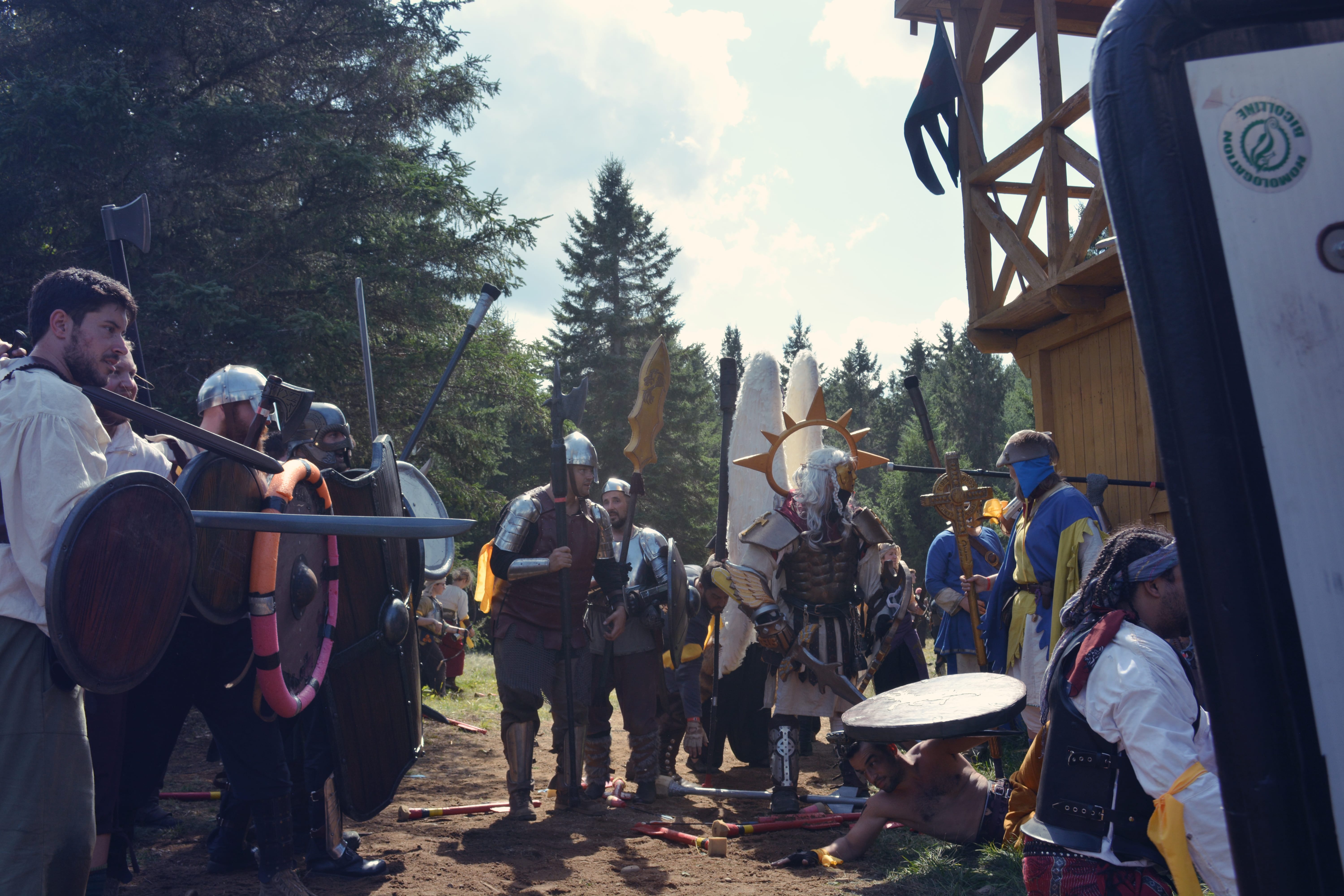 Coming Down after Game 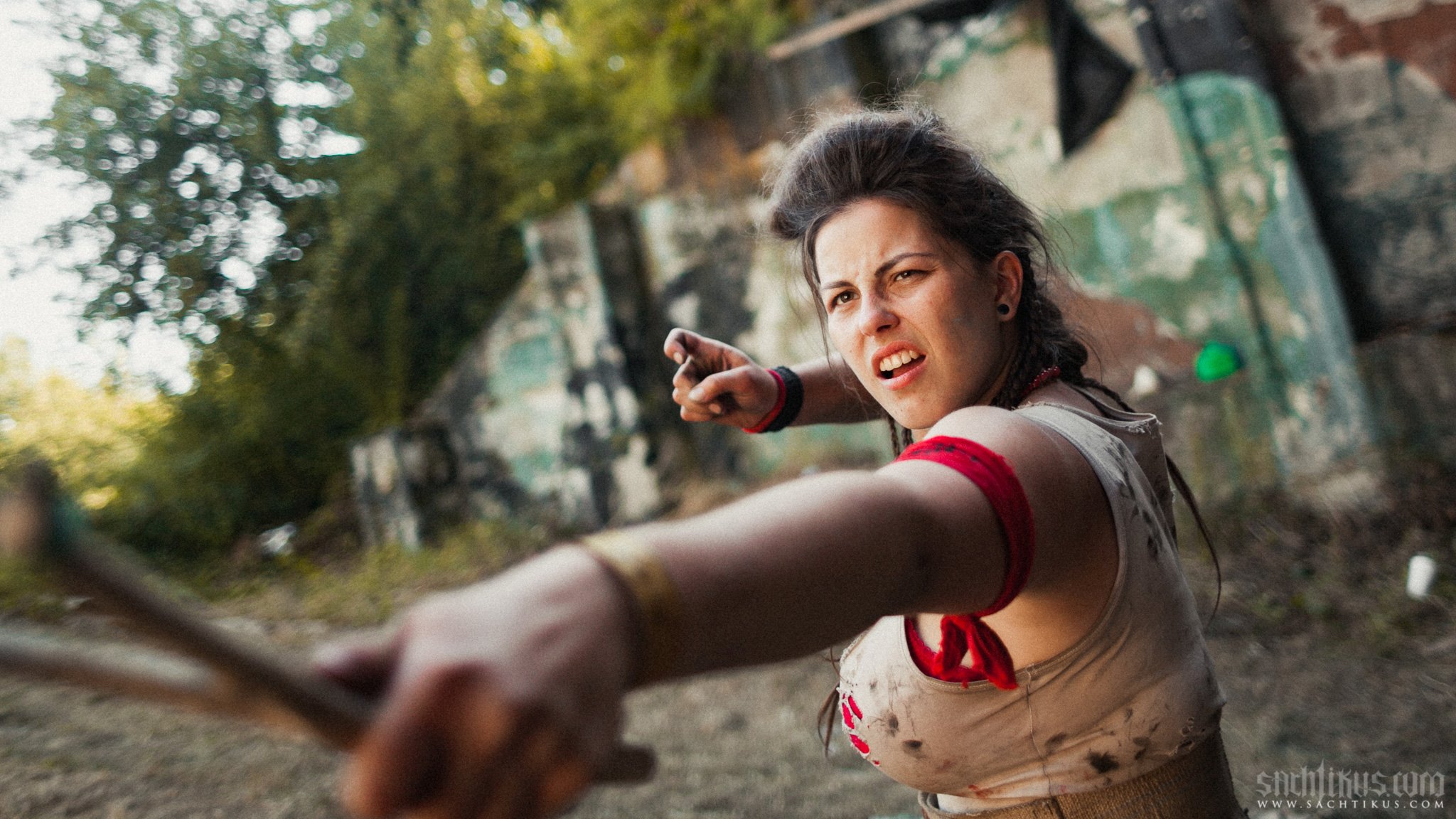 The 7 Stages of LARP Hype