Playing with Reality: Larp in Public When you LARP in the forest on a private site, you are hidden away from the world.  You create a tight group dynamic and a set of specific social norms and develop a level of comfort that diminishes the challenge of the experience to a certain degree.*  You grow accustomed.  So, in the midst of the forest LARP when a group of boy scouts wander into your site, people react in different ways that allow for a fascinating show of social psychology.  Some people hide away, embarrassed of their inner geek.  Others stand tall and proud making a show of it for the interlopers, and still others complain loudly about a ‘break in immersion’ for whatever reasons they see fit to do so.  It is a completely interesting sight to behold, seeing how people deal with a truly challenging social event.  So what would happen if they were forced from the comfort of their forest and brought into the world where they were constantly exposed?

Luckily for us we get to see first hand what happens when people play with reality.  We are currently in beta for a city LARP called Arcana which takes place entirely in the city of Toronto, Canada.  Because Arcana takes place in the real world, a cafe down the street, a university campus, an apartment building, there are always real people wandering around, being people. Thanks to the environment we have made a couple of fascinating observations about the effect of environment and circumstance on role playing.

Your geek is showing

This is a big deal for people.  Some people hide their geekiness in basements or in forests, but when you are dressed up brandishing a boffer weapon on the streets of the big city there is nowhere to hide.  This creates an instantly and satisfyingly challenging environment for players and cast alike.  It could be that people who feel nervous about showing their geek in public have suffered traumatically from it before and are afraid of being mocked.  But it could also be that people who are afraid feel that way because they don’t want to admit to themselves that they like the attention of being different and doing something unusual.  Either way you slice it, this game is all about allowing people to embrace their geek and have amazing experiences regardless of who is watching.  It may be challenging, but we definitely think it is worth it!

We were sitting at a cafe having an In-Game meeting with some of our players, when myself and one of the other players heard someone behind us at a table a few metres away talking about vampires.  It was a group of old men who may have been discussing something to do with halloween (as it was upcoming) but all of a sudden the player and I made eye contact and gave each other a knowing look.  Without being aware of it those men had created an extra layer to our game, they had unwittingly invited themselves into our sphere and added to the experience.  In a game that takes place in the real world, everything that happens has extra meaning, you start looking for patterns you might not otherwise care about and it becomes that much more interesting.

Regular people get an extraordinary experience

At that very same cafe there were a couple of people sitting nearby who were obviously eavesdropping on the conversation, and why shouldn’t they?  We were discussing supernatural phenomena, severed arms, mystical symbols and cults.  Thanks to our public performance, a couple of people just out for dinner got to listen in on the experience and have an experience of their own.  LARPing in public creates a space that sucks people into the land of imagination and perhaps might even inspire them to do something a little more unusual once in a while.  That’s a pretty cool thing if you ask me!

Imagine showing up to a party full of people you don’t know.  At first, when you are getting ready, you might be filled with confidence and excitement, but upon getting to the party a number of things happen.  You are influenced by the location, the lighting, the number of people in the party, the mood or atmosphere and the type of people who populate the party.  Your self confidence diminishes as you try to find your place within the group.  At that moment you are in a vulnerable state and subject to the tides of social and group norms that have been created by the setting.  Because Arcana uses the city as a playing board, we are able to choose different venues for different events and create characters that create various feelings in the players to play with their comfort levels, sometimes without even meaning to.  It is fascinating to see how players interact with different situations as, generally, they are the new person coming to the party every time.  At each different event there are different social rules and before they get anything done they have to find their footing and establish themselves in the situation.  This allows for an awesome amount of variety of experiences and constant changes in the social status of everyone involved.

We are having an absolutely wonderful time testing out this game and we are so grateful to all of our awesome players and cast for making it an amazing experience!  Once we have worked out all of the kinks in the rules and the organization we hope to be able to open it up to more people who might be interested in playing with reality!

Lloyd The Conqueror at SIFF in Seattle, WA 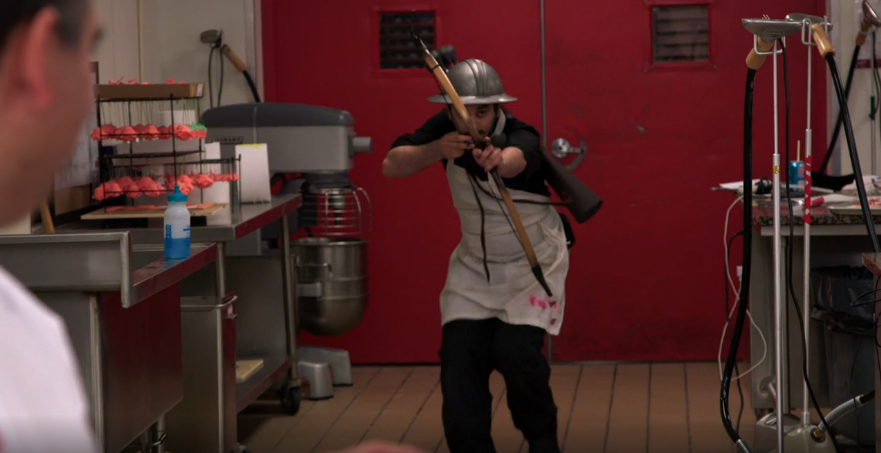 How To Larp - A Larp Comic. Meet the Characters!