Larping Staff Interviews 0 Comment
Last year Weekend Warrior held their first event and hosted over 200 larpers! Players from around the world came to attend Weekend Warrior’s first event! It was a fantastic larp filled with medieval themes battles and scenes! Players who were new to larp enjoyed the hands on introduction to larp. Even players with a wide range of experience enjoyed the immersive play of the event! Weekend Warrior is a blockbuster style larp that invites players to join one of four military factions within a kingdom. The larp even holds a spectacular feast for their players!  Weekend Warrior is an amazing experiences for players looking to fulfill their fantasy combat dreams! 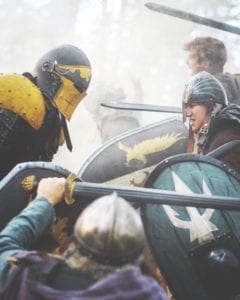 Located in South Carolina, USA, at Eastwind Castle, Weekend Warrior events are ran by Fell & Fair productions. Fell & Fair Productions is a multimedia company that the founder, Zan Campbell began to share the adventures of friends to the rest of the world.

“At Fell & Fair, we bring imagination to life through film, “storytelling photography” and live experiential events. We strive to build worlds that combine beauty and a gritty reality, all in order to tell stories that are worth the telling.” – Find out more on their website.

With Weekend Warrior hosting an event in October, Larping.org wanted to take the opportunity to speak with the Zan about how well the event went and what they hope to see in the future.

Q: How did Weekend Warrior start?
A: Weekend Warrior came about by a partnership between Fell & Fair and The Forge Studios. Both teams desired to create an immersive event where people, could easily jump in to a fantasy world and have the kind of experiences that they see in movies and read about in books but never have had the chance to experience themselves.
Q: What does Weekend Warrior mean to you?
A: For me, Weekend Warrior is like jumping in to a video game. Entering an environment where you can loose yourself in a new world, but unlike a video game, its your own skill, strength and wits that you have to rely on.
Q: What hopes do you have for the player experience?
A: We want to see players swept up in the drama, adventure and conflict of the event. For a little while, we want players to forget about the challenges of work, school and bills, and trade them in for defending supply routes, dodging assassins and holding a shield-wall against all odds. 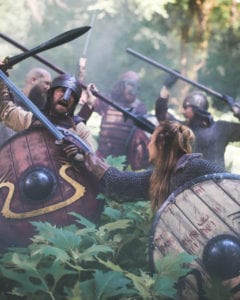 Q: Tell us more about your location!
A: We chose Eastwind as the location because it provides the necessary infrastructure for modern life (such a bathrooms, showers and power) while providing a wooded environment that allows factions to separate themselves and create a dynamic environment.
Q: What stories are being told at Weekend Warrior?
A: Weekend Warrior is about the lives and deeds of everyday warriors. Though great powers strive for dominance, we have designed the event to create a sandbox for players to create their own experience. So while we create a dramatic storyline that plays out in Shakespearian fashion, it is the players who’s deeds will turn the tide of war. So last year at our first event, the king and queen were murdered and in the ensuing turmoil, a new king, their long-lost son was found and crowned king. Players and their factions developed unique culture, tactics and memories to enhance their experience. Now the forces of the kingdom are marking to the wild boarders of the realm in search of a long-lost artifact that will give them an edge in the fight agains the forces of the dark. But with a new king, recent bad blood and more challenges to face, who knows how the expedition will turn out.
Q: What was the event like last year?
A: Last year we kicked off our first event with over 200 people gathered for the king’s Autumn Feast. We placed our event in the human kingdom of Olaran and each player was the member of one of four military factions from within the kingdom. After sharing an amazing medieval feast together, the murder of the royal sparked a conflict that saw factions pitted against one another. While our world contains magic and mystical creatures, the story pivots on the deeds of the normal humans (the players) who answered the call to arms.
Q: How has the event changed from last year?
A: After our first event and the lessons we learned there we are tweaking several things for this year. For the in-game experience, we have worked on finalizing the aesthetic vision, adjusting armor rules and putting much more value on healers (player characters). Logistically, we have streamlined things to give the players more choices and to reduce the cost to the player wherever possible. You can find a full list of “things that have changed” here.
Q: What was Fell and Fair’s inspiration for Weekend Warrior?
A: Simply put, we wanted to bring what we do in film and photography to a live event. So Fell & Fair’s vision of gritty, realistic fantasy can best been seen in the visuals of Weekend Warrior. We designed Weekend Warrior like we would an original fantasy film. We worked hard to build original, cohesive cultures that function well within themselves as well as with the other factions and the world at large. Most of the information we has humans take in is visual, so it made sense that for an immersive event, visuals would be the most important. So the Fell & Fair costume design team was set to work to build a world that is truly believable. Not only does this involve creating the cultures, but it means creating and enforcing guidelines for the players as well. While everything you need can be purchased on our website, we encourage players to bring there own gear as well. However, every item that enters the play area must be approved, not only for the event in general, but for your specific faction aesthetic. While some view this as restrictive it is the quality that really makes Weekend Warrior the premiere immersive event in the United States. The greatest complement we received last year was, “This looks better than most European events”. 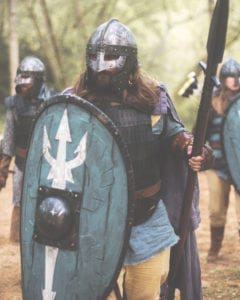 Q: What Lord of the Rings influences will be at the event?
A: Obviously, from it’s inception Fell & Fair is massively influenced by the Lord of the Rings and other works by great fantasy writers. Players who attend will see bits of Aragorn and Faramir in the Rangers faction, hints of Dol Amroth in the Sea Lords, the might of Nûmenor in the Kingsmen and a tad of the Rohirrim in the Hearth-guard. But more similarities will be found in the common inspiration we share with writers like Tolkien, Lewis and Chesterton themselves. We mined extensively from historical characters and events even as Tolkien did. The Sea Lords may remind you of the folk of Dol Amroth in Gondor because both cultures too cues from the Byzantine empire at its height. The Rangers are similar to those found in Tolkien’s works, because they both are based on England’s forest-welling folk heroes like Robin Hood. So while you will find no Hobbits, Ents or Nazgûl at Weekend Warrior, we hope to build a world that would make sense to even the great Tolkien himself.
Q: Did you have an personal experiences at Weekend Warrior that you would like to share?
A: Honestly, I was blown away by the first event. Originally Fell & Fair’s main role was costume and culture design as well as leading some of the factions. Having never done an event that involved immersion before, I was really mainly there for the combat and the visuals. But once the event started, I remember there was a moment where it all “clicked”. I went from being Zan, a former naval officer, costume designer and pretty nice guy, to being Torvin, Commodore of the Fleet and First Sea Lord who bowed to no man and had 50 Sea Lords at his back itching for a fight. I was shocked when a player approached me on the third day and said, “You know, I thought you were a real *[expletive]* until I saw you when you were alone with your Sea Lords, how much you loved your people and how much they loved you.” Rather than being regular eager-to-please Zan, I was an iron-hard lord-of-war to all others while only exposing my soft-side to my own faction. I did not count on this experience happening at all. I really think it gave me the confidence to stand up to some hard situations I would face in the next few weeks.

To join the Weekend Warrior Experience from October 18-20, 2018 in Trenton, SC, purchase your Event Ticket here.
Your Event Ticket includes the price of admission, faction tunic, and six catered meals. 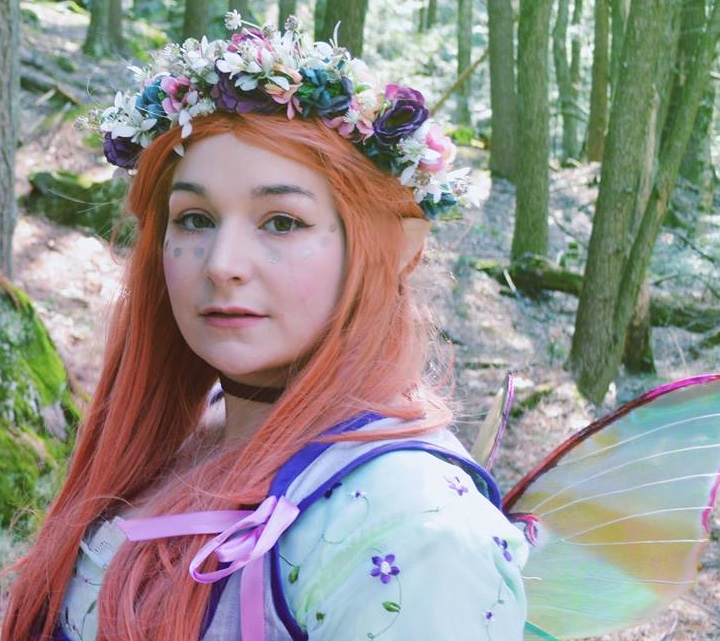